Setting Callahan Straight -- on reductionism and the history of science

In a recent post on his blog, Gene Callahan tried to defend the "mysterious vital force" hypothesis from the clueless reductionists, saying that hey, it was a good idea at the time, and might even show some promise today.

After I explained that the "vital force" of the 18th century used to "explain" life (in the way that the "train force" explains the motion of trains) was not scientific in the way that gravitational force was, the exchange started to get lengthy. So, he did was all pursuers of the Truth do: he closed comments.

And this isn't the first time for Callahan to use argumentum ad closum: in a previous exchange where "TokyoTom" was the critic, he did the same thing, and TokyoTom recounts the pre-cutoff (and pre-coverup!) exchange on his blog.

So, since I can't post on Callahan's blog for that discussion, I decided to post my response to his latest comment here. So, take a gander at the discussion thus far, and read my response below. Let's hope it's just a "blog malfunction" this time, too!

Now, of course, this is not an explanation, just like Newton's force laws do not "explain anything," as the Cartesians ceaselessly pointed out.

And the Cartesians were dead wrong to argue this. Generating a model that correctly predicts the paths of celestial bodies (and bodies in vacuums, and falling bodies on earch with a high mass/drag ratio, etc.) is an explanation. The alternative -- your alternative -- results in such absurdities as "Okay, okay, sure, you were able to accurately predict celestial motions, material strengths, rocket propulsion capabilities, air properties, blah blah blah ... but you don't truly understand what it means to fly to the moon and return safely. Yeah, you have a 'model' that accurately predicts all that stuff, but you didn't truly [*suggestive emphasis*] explain it."

What else could you want from an explanation? The satisfaction of Gene Callahan's personal aesthetic standards? Or your presuppositions about things that have to be there?

Descartes and other mechanists developed models showing how gravity and magnetism could be reduced to the motion of particles alone -- Descartes, for instance, posited a flow of little screw shaped particles drawing iron to magnets.

And that would be a *different* explanation. It may be a better or worse explanation. But "reducing to particle motions" is not a requirement for an explanation, especially if it's wrong or unnecessarily long. Newton's model remains an explanation in that it constrains our expectations.

At the time, vitalism was a sound scientific hypothesis, and the vitalists expected to find good force laws just like for gravity, etc.

And they had no basis for such an expectation, even before an experiment, since "the vital force" is an "explanation" for everything, and therefore nothing. No matter what experiment they performed, it would be consistent with a "vital force". That was how they actually used the term.

me:"Your claim was stronger because you are saying that now, even given all the scientific knowledge we have, there still remains hope for the vital force "hypothesis"..."

you:All sorts of scientific hypotheses get revived after being "soundly rousted" earlier.

Right, but about the issue we were discussing: My claim, the one you're responding to here, is that the position you do endorse ("Vitalism may turn out to be a fruitful hypothesis") is a stronger claim than the one you excused earlier vitalists for believing (that it's reasonable given the limited evidence so far).

Yes, theories do get revived after being discarded. But as for the point that I was actually discussing there, it's irrelevant; the fact remains that you are making a stronger claim.

Now, with that said, scientists are indeed looking for causal phenomena and more general laws they may not have noticed before. But they keep a *broad* outlook. There are many, many shorter hypotheses to rule out before positing an additional, ontologically-fundamental "vital force" -- if in fact the "hypothesis" claims anything at all.

Oh, and what do you think about the complete overthrow of reductionism in quantum mechanics, where the behaviour of "atomic" particles turns out to be not atomic at all, but dependent instantaneously on the state of all other particles they have interacted with throughout their entire history, so that ultimately their state depends on the state of the entire universe?

Now you're just showing more ignorance of science on top of ignorance of reductionism. It was the philosophers, not physicists, who fell into the trap of thinking of particles, rather than an amplitude distribution over configurations, as being ontologically fundamental entities, and so were seduced to believe, "hah, I can say that you can never prove two electrons are identical, because that's an issue of epistemology, which I'm an expert in, rather than physics", which is wrong.

Reductionism of the kind I (and Drescher and Pearl and Jaynes and Hofstadter) endorse was never predicated on the existence of "atomic particles". Rather, it identifies where such hidden assumptions come in.

What modern quantum physics shows is that the wave equation is deterministic, and each point need only look at its immediate neighbors to iterate to the next state. See the excellent work of Gary Drescher in Good and Real: Demystifying Paradoxes from Physics to Ethics, or, for an online source, Eliezer Yudkowsky's quantum physics sequence.
Posted by Silas Barta at 1:52 PM 2 comments

Last weekend, I adopted a little black male kitten that a friend of mine had found and was taking care of. He (the kitten, I mean) will be joining my other cat, Cordie, whom you may remember from her younger days. Cordie's a lot bigger now, though, and is playing mommy for her new friend.

Here are some pictures of the most adorable kitty ever! (Click to enlarge.) 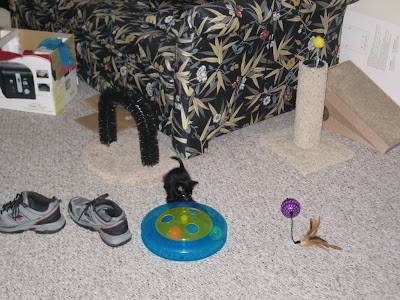 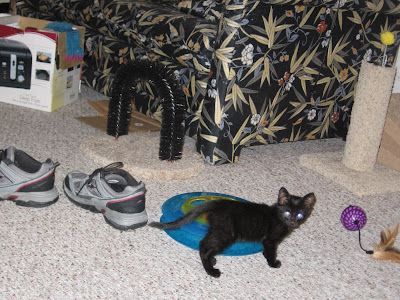 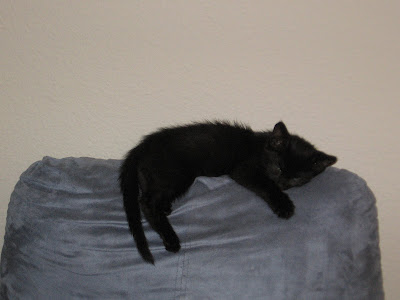 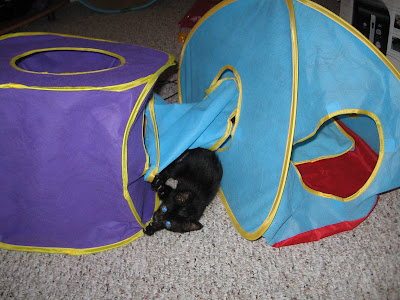 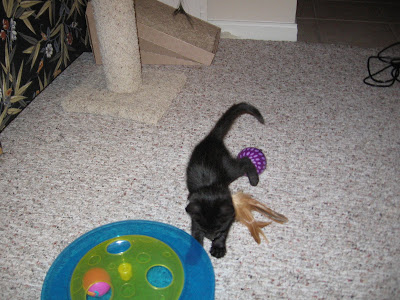 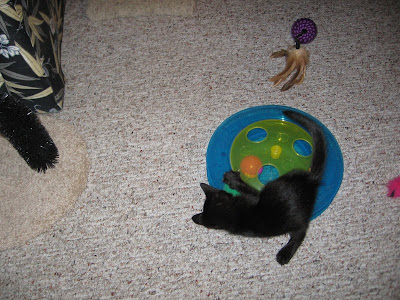 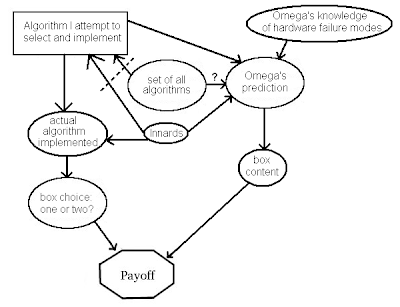 ADDED: Oh, and here's the long discussion that led me to draw the network above. Click the picture to enlarge.
Posted by Silas Barta at 11:21 PM 2 comments