Happy birthday to me...

Today is my big 30th birthday. Check out the cake my friends made for me! (Click to enlarge.) 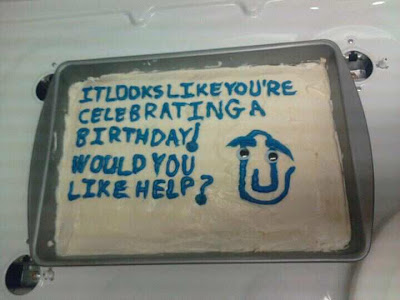 You know you're an economist when ...

... you find yourself needing to cite “Buchanan 1973″ when claiming that gangs want to do “too many” drive-by shootings.

Though it's not exactly the same thing as the list that I'm making up, it turns out that some people actually don't want to opt out of being killed by the state.

You see? When we have it all formalized with a list, governments can know who doesn't and who does want to be killed!
Posted by Silas Barta at 5:11 PM 0 comments

To respond to some of the burning questions you all have about my new list, here are some answers:

What does being on the Do Not Kill List (DNKL) mean?

It means you have expressed your desire not to be subject to targeted killings by the US government or any of its contractors (i.e. that you've "opted out" of such programs the CIA one detailed by Reuters that is not subject to judicial review), preferring instead that, if the government believes you have committed a capital crime, it should apprehend you and pursue a criminal case in full accordance with your Constitutional rights, such as "habeus corpus", "due process", "right to counsel", "right against self-incrimination" and all other kinds of obscure stuff you might not have heard of.

Wait, is this official? Is the government actually going to abide by this?

Probably not. The idea is just to make sure some list of this type exists so that the government won't be able to pull a trick like, "oh, well, see, Mr. Doe didn't actually invoke his right against secret assassination, so we can assume he waived it".

Isn't this dangerous? Can't someone, like, break out the Uzi and start mowing down people, and then be like, "oh, oh, oh, look, my name's on the DNKL, you can't touch me!"?

No. This "opt-out" doesn't prevent the government from arresting you and prosecuting you to the full extent of the law, even if it were to abide by the list.

I was convicted of a grisly triple murder and sentenced to death. I was accorded full due process and have exhausted all appeals. I'm now set to be executed soon. Optimistically, will being on this list protect me from being executed?

No. The DNKL administration takes no position on current laws or punishments in the US, only on people's right to "opt-out" of government-sanctioned extrajudicial killings.
Posted by Silas Barta at 5:14 PM 2 comments

You might have heard about the so-called "Signaling model of eduction", promoted by Bryan Caplan at GMU (among others!), and it's something I find plausible.

First, some background: The problem is to explain why people who get a college education are more able to get jobs, and better paying ones. The traditional explanation is that colleges provide you with knowledge skills that allow you to be more productive. (This has always seemed suspicious to those of us who have remarked, throughout our education, that "I'm never gonna use this stuff" ... and been mostly right.)

The signaling model, in contrast, says that completion of college simply reveals your possession of good traits for hiring that you already had before, but could not convincingly claim to have until you completed college, since a college degree indicates some combination of intelligence, willingness to do boring stuff that doesn't make sense, and capacity to be indoctrinated into and conform with a group (I'm simplifying a bit). These things are hard to test in a job interview, or, in the case of intelligence, usually illegal to test for.

A few years ago, I pointed out (HT: Bob Murphy [1]) that one usefully testable implication of the signaling model is that you should be able to earn big profits by running a business that provides high school graduates with the same "signals of good qualities" that a college provides, but at significantly lower (monetary) cost to them, simply by "cutting out the fat" -- all the stuff that doesn't help to signal the student's ability. You would just set up some school that filters students by IQ, and then puts them through hell, gives them difficult assignments, poor living conditions, etc. No way an unemployable person could survive through that kind of regimen, right?

So there's your idea: you make students just as employable, but they don't have to take on nearly as much debt.

Interesting caveat: in one discussion of my idea, someone mentioned that this business model is already in widespread use: specifically, the military! Let's go through the checklist:

- Cheaper than college? Check. (Heck, in terms of money, they pay you!)
- Enforces indoctrination and unquestioning following of direction? Check! [2]
- Selects for people who are willing to give a lot to a big organization? Check.
- Employers regard service therein as equivalent to college experience? Check (usually).
- Gives experience doing boring tasks because you were told to? Check.
- Generally puts you through hell? Check.

Wait, this can't be right, can it? This comparison fails in that the military doesn't filter people based on an IQ test! Hah!

Not so fast -- they've got that one covered: in the US, it's called the ASVAB, which determines whether you can get in, and then which branch, role, or officer status you're eligible for. (My mom used to pass on her dad's remark that, "the army'll take anyone who can crawl there, but not the Coast Guard! An exaggeration, of course, though the branches do have different score cutoffs.) The ASVAB is, in content, an IQ test.

Now, if you can provide a better value than the military (say, to people who don't want to possibly be put in harm's way), here's your business idea!

[1] Yes, a hat tip for pointing me to my own post,.
[2] Note: this isn't always a bad thing. As Eliezer Yudkowsky put it in that article:

Should we expect group 1 to defeat group 2, because group 1 will follow orders, while everyone in group 2 comes up with better ideas than whatever orders they were given?

In this case I have to question how much group 2 really understands about military theory, because it is an elementary proposition that an uncoordinated mob gets slaughtered.

In the wake of US citizen and al-Qaeda booster al-Awlaki's killing by drone, some have raised alarm about further targeted killings of US citizens (including Glenn Greenwald and my close, personal friend, Bob Murphy). And indeed, Reuters is now reporting that there are secret CIA kill lists of US citizens not subject to judicial reivew.

At this point, many people are wondering if they can have themselves removed from such a list (like al-Awlaki's father unsuccessfully tried to do). Well, a thought occurred to me: we have the Do Not Call list, right? Why not a "Do Not Kill List" so that you can let your government know you want to opt out of its targeted killing program, and would prefer, in the case of suspicion of capital crimes, you be given a public trial instead, and then only killed if found guilty or something.

Since no one else seems to have started this yet, I figured I'd give it a go. Personally, I want to opt out of being killed (I'm a big fan of trials), so I'll be first on the list. While I'm not sure about the legal niceties, I don't want my family killed either (though it depends on the day in the case of my brother ...), so I'm going to add them to the list too. Here's the Do Not Kill List as it stands now:

Do Not Kill List (opt-out for CIA targeted killing program)

Doesn't take a lot of memory to store as of this moment. I'm thinking of expanding it in the future so that it has more specific identification of persons -- say, pairing a given person with their Social Security number and/or email so that you won't have some goofy "Sarah Connor/Terminator 1" moment where you kill the wrong person because they have the same name. (Don't worry, the entries will be hashed to prevent abuse.)

Please contact me, either by email or in the comments, if you want to be on the list.