Disaster Keynesianism -- Say something responsive for once!

Last day in Budapest for now, leaving in a few hours. But it looks like the topic of the day is the economics of Hurricane Sandy, and, as with any discussion of economics during a natural disaster, whether it will be "good for the economy".

Needless to say, this is a discussion that has happened several times already. Still, engagement with the other side's arguments is always good -- as long as you're actually, well engaging, rather than extending and reinforcing a non-responsive (or no-longer-responsive) point.

Which brings us to pseudo-contrarian Steve Landsburg's latest pseudo-contribution to the matter. He thinks he has an even more devastating critique of the "hurricanes can be good for the economy" by posing this:

ask your opponent whether it’s “good for the ants” when you put a stick down their anthill, wiggle it around and destroy their infrastructure. Go ahead and acknowledge that this can sure put a lot of ants to work.

Or, for that matter….

Ask if spilling ink on the living room rug is “good for your household’s economy” because of all the cleanup work you’ll do.

Of course, this doesn't actually address the Keynesian's central point, because their claim is that normally such acts are destructive, but need not be so when there are idle resources (found after a quick search).

To make absolutely sure I'm not misunderstood, please read these caveats if you plan on responding:

- I don't agree with they Keynesian "idle resources" argument, and have said as much before.

- I realize that Keynesians (and their critics) acknowledge that there are always better ways to do economic stimulus than a natural disaster -- just employ those otherwise-would-be-disaster-response-resources to do something that's not completely wasteful.

And yet there's no mention of relevance of idle resources in Landsburg's post, or in the army of back-slappers or hangers-on that dominate the beginning of the discussion. When we finally do, it's from critics who offer surprisingly good analogies, like commenter "Brian", who compares a stagnant economy to laziness ("akrasia") in an individual:

Suppose Billy Joe has been in bed for years. He’s overweight and unmotivated. His life appears to continue to spiral out of control as he watches reruns of every horrible show made from the 1970′s on. But when that ink falls on the floor, this finally gave him a reason to get out of bed and clean up the mess, and the mere activity of it kick started him into action of doing thins again, and even being motivated [sic]

And the defenders of the post (I guess *not* surprisingly) miss the point that of course making new windows is better than fixing broken ones, but that's not an option here. Landsburg himself does that in this comment:

... this is ridiculous, on Keynesian grounds or any other. If you believe it’s important to hire idle resources in order to “stimulate the economy”, then you don’t have to wait for a hurricane — you can hire people to build *new* bridges instead of having them rebuild old ones. The hurricane does not in any way expand your set of policy options; it only destroys stuff.

Except, of course, that it does expand your options, since by supposition, policy makers won't allocate funds for public works projects that build new windows, but will gladly fund projects to restore the windows that were broken in the disaster. (To re-iterate: I disagree that such public works funding -- whether for building or fixing -- is a good idea for "helping the economy"; this is simply about appreciation of one's opponent's arguments and responsiveness thereto.)

***
My point here is that if you want a really hot one-line zinger for why the "hurricanes good for economy" meme (in its most intelligent form) is wrong, you're going to have to do a lot more than just say that destruction is bad. No -- you're going to have to show why destruction is not "better than nothing" if its effect is to put (only) idle resources to use, thus giving people the dignity of a job and practice of their skills, when you don't have the option (for e.g. political reasons) of simply employing those idle resources to build on top of existing wealth.

What's that, you say? It's hard to give a concise, fun explanation of why that thinking is wrong? Well, it should be. Two-sided political debates tend to be like that. My shortest debunking is at least this long

Can you do better? Perhaps. But it won't be by invoking the ten millionth permutation of "destruction is bad, m'k?".
Posted by Silas Barta at 3:38 AM 17 comments

What's up with further vs farther?

Yeah, I know it's been a while since I posted, and I've kinda let this blog die off, but I figure, better late than never, right?

So, to start with just a random thought: Why is it that "farther" seems to be the only word we can't use figuratively? The standard explanation is that "farther" is only used for literal distance, while "further" can be used in a figurative sense.

What's up with that? What other word do we have this rule for? As I understand it, you get to use any word you want in a figurative or metaphorical sense. Why not "farther" as well? (I guess the one other example would be "literal", which I oppose the figurative use of, since, ya know, it's the one word that's supposed to actually distinguish the two cases, and without which we can't even speak of the difference.)

It just doesn't make a whole lot of sense.

[Insert usual remark about how I composed this entire post, including navigating to and copying the link, without the mouse or trackpad.]
Posted by Silas Barta at 10:05 PM 5 comments

So the place in Budapest where I'm staying is called the K9 Residence.  What I need to say next depends on your native language.  Please skip to the subheading that best describes you.


No, the place doesn't have anything to do with dogs, nor can one jokingly say that they "treat you like one".  The name comes from how it's number 9 on the street Karoly Korut, and no one ever alerted them, apparently, that K9 is a common shorthand for "dog" in English.  (Or perhaps they did learn that much, but deemed it too late to change.)


Hey, did you know that in English, K9 is a common symbol or abbreviation for "dog"?  Yeah, it comes from how it's pronounced like "canine", the adjective for dog based on its Latin root canis.  Remember that movie K-9?  Yeah, kinda like that.

****
Anyway, I don't expect all of this internationalization to go perfectly for everyone, but, well, y'all could have saved me from having to explain stuff to a lot of people of different native tongues...
Posted by Silas Barta at 8:22 AM 2 comments

Taking the anti-mouse campaign ... to the next level

Wow, did you guys know that you can buy domain names now?

And that no one had yet taken "tyrannyofthemouse.com"?

Well, I snapped it up, and it will include a showcase of my programming projects soon.

I also managed to move this blog to the subdomain blog.tyrannyofthemouse.com (as you might have already noticed).  Don't worry, all the old links will still work!
Posted by Silas Barta at 12:28 AM 0 comments

Ending the tyranny of the mouse -- in web browsing

Since I plan to program professionally, I've ramped up my efforts to get by without a mouse, and I thought I'd share some key tools I've used to accomplish this.

For web browsing, the key is Pentadactyl, a Firefox extension that lets you do the things you want from the keyboard. (I would say all the things, but some websites are written so as to be unfriendly to it.) For example, if you want to click on a link, you hit f, and it pops up a keyboard code over every link, and you type the code to "click" on it. Here's what it looks like when you use it: 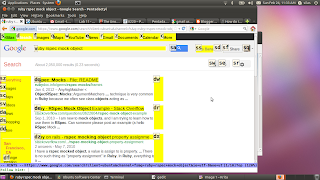 Other useful features are:
back/forward = shift+H / shift+L
page down/up = space bar / shift+space bar (these work without Pentadactyl)
half page down/up = ctrl + d / ctrl + u
search = / (yes, the slash key), then enter, then n/shift+N to search down/up
go to URL = o, space, [page url] (if you've entered something similar before, you can tab through the cached options)
go to URL in new tab = replace "o" in the above with "t"
open link in new tab: ;t , then it pops up hints as if you had pressed f but opens in a new window

However, you need to configure it a bit in order to get the most out of it. For example, as initially installed, it will remove your ability to use the familiar ctrl +c/v/a (for copy/paste/select all) due to its being based on the text editor Vim. Also, the hint keys (buttons used when creating a code that lets you click a click) are set by default to draw from the numbers 0-9, which are less comfortable to type every time you click on a link, and they are displayed too small to read.

To set your configurations, you need to create/edit a file called ".pentadactylrc" in your home directory. Here are the contents of mine, which fix the above problems:

Enjoy your breaking the tyranny of the mouse! (And yes, I composed this entire post, including creating the link, without using the mouse. I may have mentioned that a few times before).
Posted by Silas Barta at 1:04 PM 7 comments

The secret unleased: I will become a software developer!

I know I've kept my readers kind of in the dark, but I just left my day job to attempt a career change into software development and otherwise make sense of all the projects out there that I could improve. I'll be flying to San Francisco today for it, where I'll stay for at least 2-3 months, residing on the luxurious (s)Nob Hill.

Here is the site for the "Developer bootcamp" program, for which I'll be in the Feb/March cohort.

I didn't think I'd ever see the day, but because of that "thing I applied for" (more on that later) I had to get a Twitter account, and as luck would have it, @SilasBarta was available and I took it.

So you can be reassured that @SilasBarta isn't some dastardly soul trying to impersonate me.

(I was going to make another remark about having made this post purely through the keyboard, but Twitter ruined it ... some of their clickable buttons can't be recognized by Pentadactyl, the Firefox extension that tries to let you do everything from the keyboard but gets stymied by by poor web design.)
Posted by Silas Barta at 7:43 PM 6 comments

You know how it's become a sort of cliche/folk-economics to say that "You should pay your workers enough so that they can buy the product you sell?" It's supposed to be what gave Henry Ford I his tremendous success with the Model T, and has become a staple of union bargaining.

For a recent example of this line of thought, here's none other than (former Secretary of Labor) Robert Reich arguing it, complete with reference to the Model T story.

Well, it recently occurred to me how underpaid I am. My employer modifies and sells large aircraft. No way can I afford that!!!

Did somebody say "raise"?

(This post made entirely without use of the mouse -- including for looking up and copying over links -- thanks to the use of the Firefox Pentadactyl extension. Give it a whirl!)

Addendum: To clarify, Boeing is not my employer, just a synecdoche for large aircraft manufacturers in general.
Posted by Silas Barta at 10:05 PM 2 comments