Why would a Serious Thinker(tm) fear my comments?

Gene Callahan now has the cute slogan on his blog: "Silas-free for over eight twelve days": 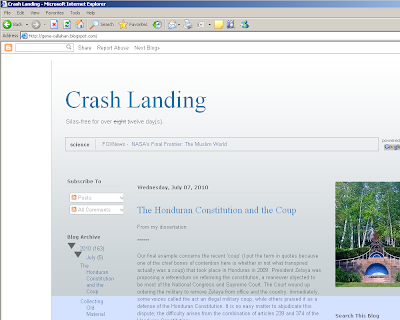 I had submitted thoughtful criticisms to his blog more recently than that, alerting him of errors he's making, and of phenomena he might not be aware of. (Example saved from before then.) So why would this Serious Thinker feel the need to reject, on sight, my comments from appearing, and then advertise it?

A self-serving reason I might give is "Well, Callahan actually not a very good thinker and only gets validation from a clique that already agrees with him, so he can't bear to see remarks that might cause him to question his worldview." But I'm far too biased to make such a judgment.

Instead I invite readers to judge for themselves how Deep and Serious a thinker Callahan is by looking at the link above. He uses the example of a monk who can't explain why a prohibition on touching women exists as a characteristic example of how some things can only be learned from experience.

(It looks to me like maybe Callahan just isn't very good at explaining, and doesn't have much of an incentive to change that. After all, that would undermine his worldview that requires knowledge to be mostly inarticulable, not to mention the aura of unquestionable expertise he tries to maintain.)

As you might expect, he justifies the Silas-free-ness by reference to the "many sites I've been banned from" for my unhelpful comments. True -- I have been banned from many sites for that reason -- it's just that they've all been controlled by him! Information cascade, anyone?
Posted by Silas Barta at 11:35 AM

"... his worldview that requires knowledge to be mostly inarticulable... "

"If you can't write clearly, you probably don't think nearly as well as you think you do."
(From "Armageddon in Retrospect", p.4)

I often find myself recalling Vonnegut's statement when I read Gene Callahan's posts - especially the posts in which he quotes his hero, the verbose yet remarkably inarticulate Michael Oakeshott.

I have decided to give you a second-chance. Now that it has come to my attention that Gene Callahan hates you, I feel it logically follows that you must be my friend!

Also, Bob Murphy has never given up on you so there's got to be something to your antagonisms.

So, now that I've managed to come across as a "large and in charge" total egotistical prick, I will more humbly say: I am following you on my GReader now and I hope to be challenged by you and learn something in the process. Enjoyed the last posts on Sumner and Callahan, so far.

Thanks, Taylor! I'll try not to disappoint.