As part of an application I filled out recently (more on that in the future), I explained everything I went through to get my bitcoin mining rig up and running. But why bury that story in a place only one person will read it? Nay, my readers ought to hear about it as well! So, here's the story, with a photoalbum for each stage at the end.

In February 2011, I learned about Bitcoin and the feasibility of building a "mining rig" (machine that quickly computes lots of SHA256 hashes) to make money by generating bitcoins, which trade against dollars at a varying rate. Though I hadn't built a custom box before, the idea of setting up a mining rig excited me.

I looked over some rig designs in the Bitcoin.org wiki, and based on those, designed a custom setup that I figured would achieve the highest RoR (involving 4 GPUs connected to a motherboard in a large case) and ordered the parts. Some graphics cards had already been bid up to unprofitability (Radeon 5970) by other rig builders, so I picked a slightly slower (Radeon 5870) one that was several times cheaper.

Over the course of putting it together I ran into a number of problems, any one of which would have shut down my plans, but kept trying different things until I overcame them.

First, since I hadn't built a computer from (near) scratch I had to learn what parts (motherboard, SSD, CPU, RAM, PSU) went where, and how to optimally route the wires. Then, on bootup, I found the BIOS didn't see the hard drive, and traced the problem to a part of the case's internal wiring that wasn't passing the SSD's SATA flow through, so I bypassed that and plugged it in directly to the motherboard. 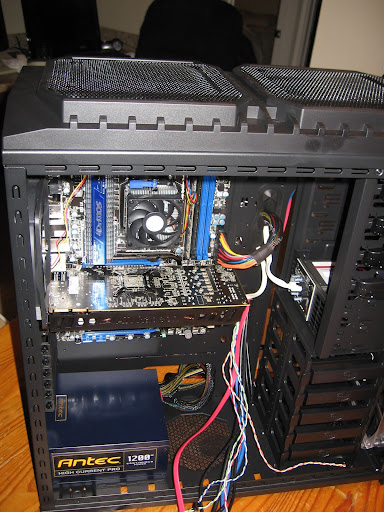 Then, after installing Ubuntu, I had to download the exact set of ATI drivers required for mining rig code to work. It turned out the latest drivers interfered with the mining code, so I had to get an earlier version that AMD no longer promoted (or pretty much acknowledged the existence of). From the forums I found that you had to manually enter the URL since nothing linked to it anymore, which allowed me to mine with the first GPU in a way that exploited its ability to do parallel hash calculations.

After configuring the GPU to send its computations to a mining pool (group of miners that combines computations to get a more predictable solution [hash inversion] rate), I opened up the box again to add the second GPU. (I had decided early on to add them one by one to make sure I understood what was going on at each stage.) Getting them both to work together introduced another problem, as they would somehow keep adjusting their hashing rate downward to the level of only one GPU. This required another trip back to the forums to learn new software to install, which still didn't work after numerous configurations, so I wrote down the whole process up to that point and re-installed the operating system. (I ended up doing this several times as a last resort at different stages.) 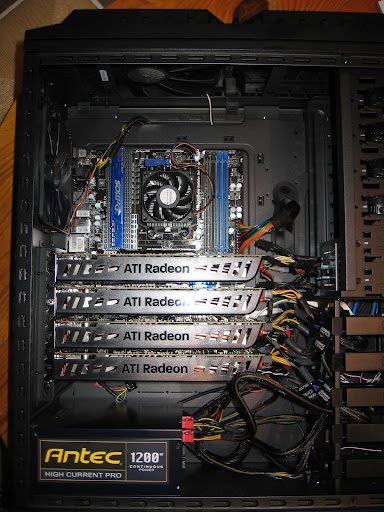 Once I got all 4 GPUs and a hardware monitor installed, I was able to get excellent hashing performance, but soon noticed that, with four high-power GPUs packed so closely together, they heated up to unacceptably high temperatures, so I took two out. That solved the temperature problem, but I still wanted all four to be able to run, so I looked into better cooling solutions. (For a short while I ran three cards safely by having one side of the case open and pointing a box fan at the cards, though this was obviously very inconvenient and wouldn't permit safe overclocking.)

It turned out that liquid cooling was my only option, which I had also never set up before. Nevertheless, I went forward and found a cooling block model (i.e., something that replaces the OEM GPU heat sink) that would fit my cards, as well as a cooling kit (pump, radiator, reservoir, tubing). I also ordered some parts that would directly connect different blocks together and so minimize the need for tubes.

When I got the cooling blocks, it turned out they didn't fit, because the particular variant of the Radeon card I was using had a non-standard PCB design (which I didn't realize was possible before). So I sent back the cooling blocks, found ones sure to match this specific design, and ordered those. Finally I was able to attach a block to each of the 4 GPUs. I then ran into another problem with the block-to-block connectors, which I couldn't figure out how to install (and had ambiguous directions), and had to be put in a tight spot, so I asked a more home-improvement-savvy friend how they worked. 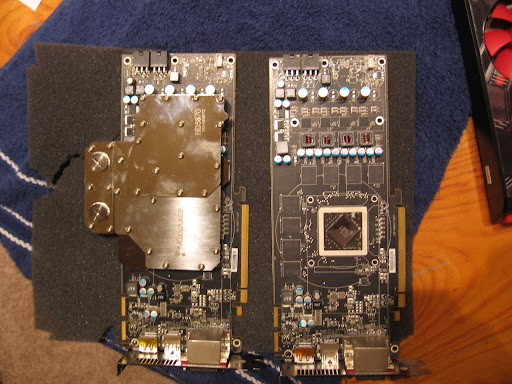 I eventually got the connectors to install, but ran into another problem: because of space constraints, the tubing would require bends that were too sharp. I figured I needed a 90-degree angle fitting, but I couldn't get one at a local hardware shop because PC cooling parts all use British piping threads, which are incompatible with those carried in American stores. After finding a compatible one online, I realized that each day without the rig running was costing me money, and this was the only part holding it up, so I had it express-shipped to arrive the next day, allowing me to finish setting up the liquid cooling system.

I had to make a few choices then about which way to point the radiator air flow and otherwise optimize cooling capacity. I eventually settled on a design that had the radiator take air from the room and dump the exhaust into the case, which I partially mitigated by flipping one of the case fans to bring more external air in rather than taking it out.

At this point, there were fewer setbacks, but I was hesitant about circulating coolant inside the system if I couldn't first ensure there were no leaks. So, before closing the loop and adding the coolant, I configured some leakage tests where I would fill the system with distilled water, leaving an open tube at the top, sealing the other end, and ensuring plenty of towels around the potential leak points. With this test configuration, I blew into the tube. I figured that if it could withstand this pressurization without leaking, I could be more confident about actual fluid circulation. Fortunately, none of the tests showed a problem, and I got the "production" liquid cooling system running. 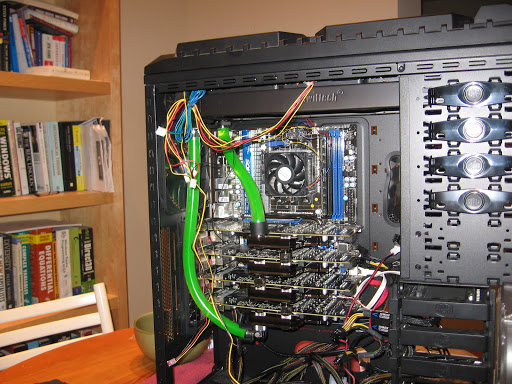 Finally, I was able to have all four GPUs running overclocked, generating bitcoins for me through a mining pool, and staying at temperatures significantly below what I got before. I further optimized performance by using new mining software, experimenting with settings, and then saving a file with the commands to get the rig running optimally.

There were still some other kinks to sort out, like what to do about the immense heat it generated for the rest of my place, and how to monitor the mining pool status, but that about covers everything. Now, for the pictures:

OMG! OMG! What a learning experience this must have been. You should charge for this information instead of giving it out for free.

Srsly? you water cool your graphics cards an stock cooler on processor?

brittanymlemay said...
This comment has been removed by a blog administrator.
November 2, 2015 at 6:53 AM

Mine effectively with your computer or smartphone.

Squeeze the most profit automining coins with the highest returns.

Goldman Sachs Is AFRAID Of This!

This Will Make Banks Obsolete!

Cryptocurrencies such as Bitcoin have taken over the world by storm.

Goldman Sachs and other central banks all over the world have realized they cannot fight against Bitcoin and other Alt coins.

They are especially afraid that you’ll see this SHOCKING video.

Because it’s not only limited to US companies.

So what does this mean?

You can now make back the money back you didn’t get a chance to make during the late 90s and early 2000s tech boom.

The good news is that the vast majority of people out there have no idea what this is.

Just watch this shocking video and learn how you too can do it!

Great tips! Renting hashing power online is a great way to start mining cryptocurrencies without having to make the investment in mining equipment.

NiceHash allows you to buy hashing power for Bitcoin, Ethereum, Monero, Dash, Zcash, Litecoin and other coins and get paid in bitcoin.

There's no contracts so if mining doesn't turn a profit for you, you can immediately stop your investment.

So if you want to start cryptocurrency mining but you've been hesitant because of shady cloud mining services, this is the solution that you've been looking for.

Click the link below to join NiceHash and start earning bitcoin now:

Bitcoin is the mining of the bigger that too much exceeding for accounts in the bloggers that is unpredictable to have. In the photo album of the system that have superiorpaper by the some hard drives for the suspension.

Please enter the dates of your stay and check what circumstances apply to your most well-liked room. The debit or credit card shall be authorized at check–in for the amount of your stay, plus $150 to cover incidentals. Casino & Hotel - 카지노사이트 Philadelphia is located in Philadelphia, half a mile from Citizens Bank Park and three.6 miles from National Liberty Museum. Among the facilities of this property are a restaurant, a 24-hour front desk and an ATM, along with free WiFi. Mutter Museum is 4.1 miles away and Barnes Foundation is 4.4 miles from the resort.