So I thought I'd try out "SYNC" by Microsoft and Ford. It's the system that lets you control your cell phone and iPod by voice. Hey, great stuff, right? What a convenient way to bounce around between your playlists, your artists, your podcasts. And even better: after having driven around in a car with merely a one-way input jack, I certainly realized the value of having an mp3 interface that a) is hidden from view so it doesn't have to be reconnected each time, b) charges as you drive, and c) will pick up right where you left off when you come back to your car.

Sync fails about as badly as possible while still having the general description given to it.

Let's go over how:

1) Sync's marketers make no attempt to ensure that your first experience with Sync is with a qualified professional, trained in the system. While there may be some dealers that provide for such (NOTE edited to clarify), Ford and Microsoft don't seem to be interested in making that a requirement to sell their hypercool, "let's make up for previous failures" product. In the two dealerships I went to to check it out, neither one knew how to operate it. On the first one, the salesman made it even worse by trying to figure it out for the first time when he tried to show it to me, even while knowing 24 hours in advance that I'd be there!

2) The Sync site is syncularly useless. No "set an appointment to try it out". No "list of dealers that offer". (Just a list of cars on which it's offered, and dealers that sell those cars ... who may or may not have Sync cars.) The list of supported phones? You get to download a pdf for this basic list. It has no forums, no feedback. Each part of the site takes a long time to load. It has no instruction manual that can tell you exactly how to do what you want to do with it (and therefore IF) you can.

3) The claimed podcast support is a LIE. While being allowed to *play* your podcast is supported, anything beyond that is little more than an afterthought. You can't tell it to play a specific podcast, and one post I found says that, as best he could discern, you have to figure out the artist, and tell it to play that. Oh, and good luck maneuvering to the specific track within that podcast that you want to hear. Hope you figured out the number!

And telling it to "start from earliest unlistened podcast and go forward in time"? HAHAHAHAHA! You're kidding, right?

4) The Ford Focuses that I looked at don't conceal your iPod from view at its point of input (as would make sense to protect it from thieves that look into your car to find stuff to steal). Okay, okay, maybe a design oversight. But no, they actually advertise how they have a special compartment to easily hold your iPod [link forthcoming], and even though the designers though to have such a nice iPod holder, it somehow never occured to them to put some kind of cover on it to keep it out of view!

5) Despite what I wanted in c) above, it doesn't just pick up where you left off each time you turn the car back on, and doesn't even bother to stop playing when you turn off the ignition. Okay guys, I can understand how neato it is to keep stuff running when you turn off the engine so you can keep up the mood when seducing your date. But what about the other 30% of my life when I'm going on various errands while I want to hear my podcasts? I want to turn off the ignition, leave, come back, start it again, and continue where I left off, all without having to fiddle with my iPod. Ease of use WAS the whole point, REMEMBER?

What's worse, as others have pointed out, the voice will nag you about your lacking metadata every time you turn your engine on! That's on TOP of you having to tell it to go to your USB input every time you start the car.

6) They want you to use Sync for a whole bunch of functions -- it's a cornerstone of their marketing (see the top ten the bottom left) -- which would imply you're going to be hitting the "voice input" button quite a bit. Yet I look at the steering wheel and find that ultra-frequently-used button on the harder-to-reach inner row of the steering wheel controls. 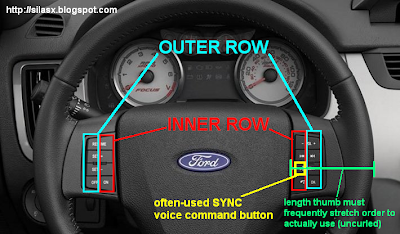 (picture from Yahoo Autos; annotations are mine; click to enlarge)

HUH? Did your designers miss the day where they taught you make the most frequently used stuff, the easiest to access?

7) It doesn't automatically shuffle your music playlists, and even after I told it to, it STILL started on the same track each time I called up the playlist. No, I'm not going to use your ultra-cool "play more often/less often" function to get this kind of thing not to happen.

8) When I hit the phone button while driving -- an error, since I had no phone set up with it nor had I turned on my own phone's bluetooth functionality -- it adamantly REFUSED to stop searching for a phone and go back to playing other media (radio or mp3s) on the car's sound system. No matter what button I hit -- the change media button, the phone button, the radio button, etc etc etc, I could not start playing the radio or other mustic. Do you understand that? Because I hit one button that I didn't really want, that caused the entire audio system to become useless until I turned off the engine. WHAT? Did your designers miss the day when they talked about containing failures? Hitting one button in error should not turn off the car's sound permanently.

Well, at least they got the voice recognition by and large correct, as well as the charging of the iPod. (Wait, I didn't check the last one there ... and frankly, I can't give them the benefit of the doubt at this point.)

What is wrong with you designers at Ford and Microsoft??? I could design a better system in an afternoon. Heck, I just did. Implement these suggestions and you have a product worth buying.

Oh, and in case you guys get your act together and are wondering: my salary requirements are $150k/year plus relocation expenses and benefits, plus, in the case of Ford, wage payment priority over pensioners. Y'all have my email.
Posted by Silas Barta at 8:17 PM

Did you honestly think Microsoft could possibly pull something like this off? It's the same brain damaged mentality that makes them ship broken Operating Systems with the intention of fixing the flaws via patches.

I wonder though, can this SYNC thing get software updates? If so, do you have to take it back to the dealer? Is it covered under warranty?

And what if you plugged a Zune into SYNC? Then again, it probably isn't a good idea... the combined suck would likely tear a hole in the fabric of space-time.

Thanks for your comment, Joel! :-) To clarify, I didn't actually buy a Ford Focus or any other Sync car. The test drives with it convinced me not to quickly enough. While I've certainly made some regrettable purchases, fortunately, this wasn't one of them! :-P

I don't know if it can get updates, but I don't think it would matter. They simply haven't written code to enable podcast navigation, and don't plan to. The physical sync manual, as well as the non-existent manual on the sync site, simply refuse to acknowledge the existence of anyone who might want to navigate podcasts.

Also, several of the problems can't be fixed with software, like the button location on the steering wheel and the lack of a built-in cover for the place where it plugs in.

btw, I made a post about this on the ford sync forum.

My experience with getting the SYNC 2.0 upgrade on my 2009 Ford Escape Hybrid Limited confirms what you say about the level of knowledge of SYNC at the dealerships - it's so thin that it's darn near invisible. Part of the reason may be (at least in the case of my particular dealer) is that the SYNC installation/upgrades are out-sourced, leaving little incentive for anyone at the dealer's service department to learn how it works.